Soligenix, Inc. (NASDAQ: SNGX) is a late-stage biopharmaceutical company focused on developing and commercializing products to treat rare diseases where there is an unmet medical need. The SNGX specialized BioTherapeutics business segment is developing and moving toward potential commercialization of HyBryte(TM) (SGX301 or synthetic hypericin) as a novel photodynamic therapy utilizing safe visible light for the treatment of cutaneous T-cell lymphoma (CTCL). With a successful Phase 3 study completed, regulatory approval is being sought and commercialization activities for this product candidate are being advanced initially in the U.S. Development programs in this business segment also include expansion of synthetic hypericin (SGX302) into psoriasis, the SNGX first-in-class innate defense regulator (IDR) technology, dusquetide (SGX942) for the treatment of inflammatory diseases, including oral mucositis in head and neck cancer, and proprietary formulations of oral beclomethasone 17,21-dipropionate (BDP) for the prevention/treatment of gastrointestinal (GI) disorders characterized by severe inflammation including pediatric Crohn’s disease (SGX203) and acute radiation enteritis (SGX201).

The SNGX Public Health Solutions business segment includes active development programs for RiVax(R), a ricin toxin vaccine candidate, and SGX943, a therapeutic candidate for antibiotic resistant and emerging infectious disease, and a vaccine programs targeting filoviruses (such as Marburg and Ebola) and CiVax(TM), a vaccine candidate for the prevention of COVID-19 (caused by SARS-CoV-2).

The development of the SNGX vaccine programs incorporates the use of a proprietary heat stabilization platform technology, known as ThermoVax(R). To date, this business segment has been supported with government grant and contract funding from the National Institute of Allergy and Infectious Diseases (NIAID), the Defense Threat Reduction Agency (DTRA) and the Biomedical Advanced Research and Development Authority (BARDA). 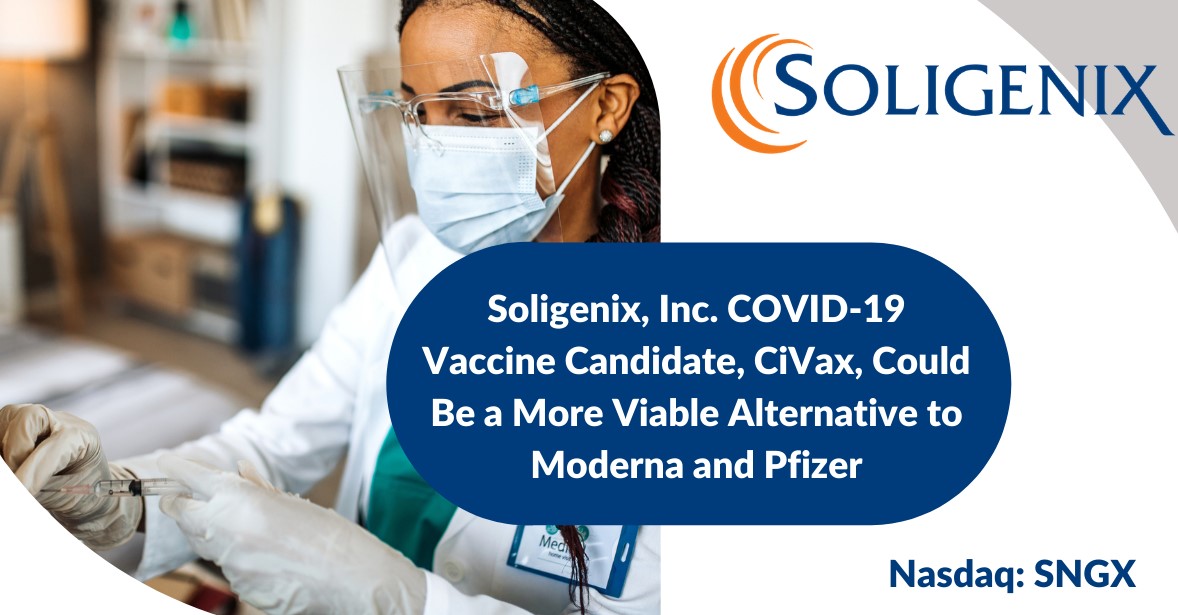 On April 19th SNGX announced that it has received approximately $1.4 million, net of transaction costs, in non-dilutive funding via multiple government tax programs.

“We have received $1.2 million from the state of New Jersey’s (NJ) Technology Business Tax Certificate Transfer Program and $0.2 million from the United Kingdom’s (UK) Her Majesty’s Revenue & Customs (HMRC) Research and Development (R&D) Tax Credit Program,” stated Christopher J. Schaber, PhD, President and Chief Executive Officer of SNGX. “We continue to be extremely active in our pursuit of non-dilutive funding to offset operating expenses. This is our twelfth year receiving NJ Net Operating Loss (NOL) funding. Over this time period, we have received approximately $7.6 million in non-dilutive NOL funding. This has allowed us to advance our rare disease pipeline to where we are today, with multiple later stage clinical assets and preparing to file a new drug application for HyBryte(TM) for the treatment of cutaneous T-cell lymphoma later this year. We are grateful for NJ Economic Development Authority’s (NJEDA) continued support of its biotechnology industry. This is also our third year receiving the HMRC tax credit, to date we have received $0.5 million to support our clinical trials in the UK.”

The NJEDA program enables approved technology and biotechnology businesses to sell their unused NOL Carryovers and unused R&D Tax Credits to unaffiliated, profitable corporate taxpayers in the state of New Jersey. This allows businesses with NOLs to turn their tax losses and credits into cash proceeds to fund additional R&D, purchase equipment and/or facilities, or cover other allowable expenditures. The NJEDA determines eligibility for the program, the NJ Division of Taxation determines the value of the available tax benefits (NOLs and R&D Tax Credits), and the NJ Commission on Science and Technology evaluates the technology and its viability. The State of NJ was the originator of this program and the first state to implement and fund it.

The HMRC R&D Tax Credit Program supports companies like SNGX that work on innovative projects in science and technology in the UK. It can be claimed by a range of companies that seek to research or develop an advance in their field. 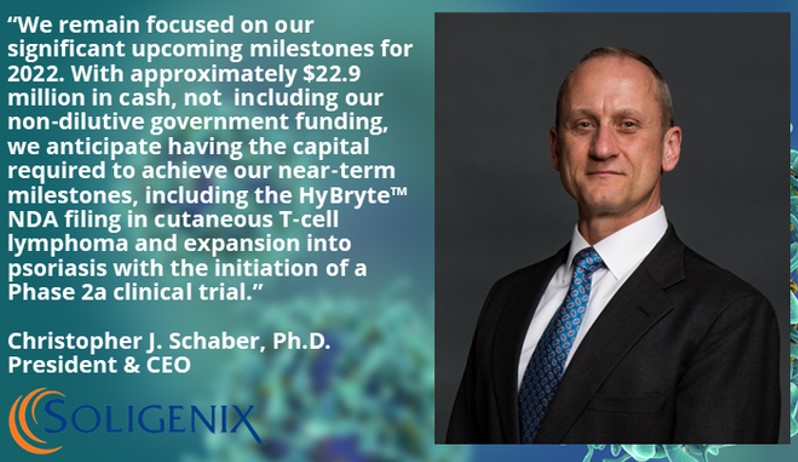 On March 29th SNGX announced its recent accomplishments and financial results for the year ended December 31, 2021.

“This year will be a pivotal year for the Company as we anticipate achieving a number of transformational milestones,” stated Christopher J. Schaber, PhD, President and Chief Executive Officer of SNGX. “Most importantly, these milestones include submission of the new drug application (NDA) to the United States (U.S.) Food and Drug Administration (FDA) for marketing authorization of HyBryte(TM) (SGX301 or synthetic hypericin) in the treatment of cutaneous T-cell lymphoma (CTCL), a rare form of skin cancer. Additionally, we anticipate initiating a Phase 2a clinical trial in mild-to-moderate psoriasis with SGX302 (synthetic hypericin), where we have already demonstrated positive proof of concept in a small Phase 1/2 pilot study. Under our Public Health Solutions business segment, we continue to advance our heat stable vaccine platform technology, ThermoVax(R), including through development of filovirus vaccine candidates (targeting Ebola, Sudan, and Marburg viruses), a novel heat stable COVID-19 vaccine candidate, CiVax(TM), and a ricin toxin vaccine, RiVax(R), where non-human primate (NHP) data for all three vaccine programs has demonstrated significant efficacy.”

Dr. Schaber continued, “With approximately $23.3 million in cash, not including our non-dilutive government funding, we expect to have the capital required to accomplish our near-term milestones, including NDA filing and expansion into psoriasis with the conduct of the Phase 2a clinical trial. We continue to evaluate various strategic options, including but not limited to, partnership and merger and acquisition opportunities.”

— On December 2nd SNGX announced 100% protection of NHPs against lethal Sudan ebolavirus challenge using a bivalent, thermostabilized vaccine formulated in a single vial, reconstituted only with water immediately prior to use. To view this press release, please click here.

On January 12th SNGX issued a corporate update. Despite supply-chain delays in receiving the active pharmaceutical ingredient for SGX301, aka HyBryte(TM), SNGX is still on track to file a new drug application with the FDA in the latter half of 2022.

HyBryte(TM) from SNGX is an early-stage treatment for cutaneous T-cell lymphoma (CTCL), a condition that affects an estimated 20,000 patients in the United States. The condition is also prevalent in Europe and Asia. It is caused by the migration of malignant T-cells to the surface of the skin and manifests itself in lesions, tumors, and plaques. 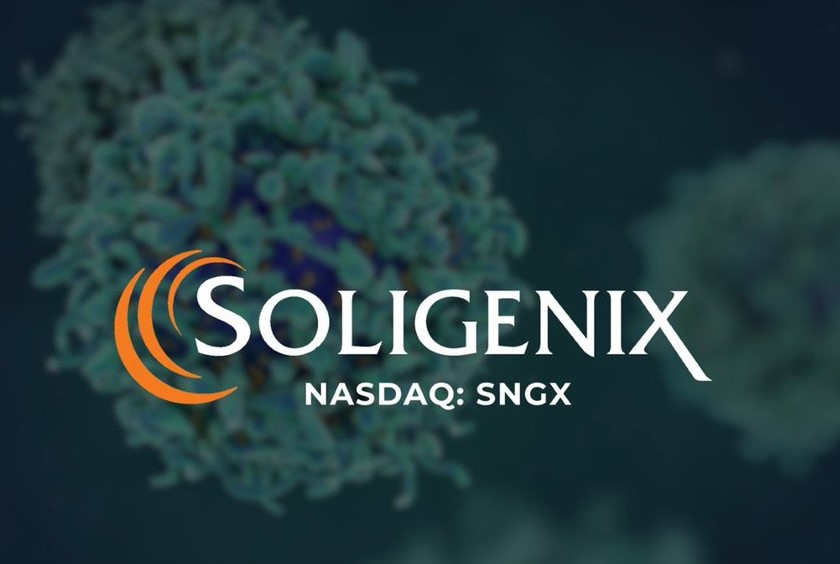 Clinical testing of HyBryte(TM) has yielded consistently positive results. It works by applying fluorescent light to synthetic hypericin. In December, a Phase 3 FLASH study showed a rapid treatment response in six weeks and sustained responses in twelve and eighteen weeks that produced significant improvement for half of the trial participants.

The trials have been so effective that SNGX is now exploring a second formulation, SGX302, to treat psoriasis. A Phase 1/2 pilot study was previously conducted to demonstrate proof of concept (PoC) and a Phase 2a clinical trial is being initiated later this year. According to Fortune Business Insights, the global psoriasis treatment market is projected to reach $40.58 billion by 2027.

In addition to the good news on SGX301 and SGX302, SNGX also reported that their heat stable vaccine technology is showing positive results. Testing in non-human primates (NHP) have shown significant efficacy in their filovirus candidates that target Ebola, Sudan, Marburg, and Covid-19. A ricin toxin vaccine (RiVax®) also continues to show promise.

Heat stabilization solves a logistical problem that other vaccine developers have been challenged with. The existing Covid-19 vaccines from Moderna, Johnson and Johnson, and Pfizer all require shipping and storage at sub-zero temperatures. That makes them impractical for remote and technologically underdeveloped regions. SNGX is solving that problem.

NDA filing to FDA l of HyBryte(TM) should increase share prices for SNGX. According to a recent article by Zacks Research, a new drug approval can lead to a higher share price for the company receiving that approval. SNGX is on the cusp of that now, and investors are already buying in.

SNGX CEO Dr. Christopher J. Schaber told shareholders in his recent corporate update that the company remains energized by the promise of their development pipeline. He also reported that the SNGX is continuing to evaluate potential strategic options, including partnerships, mergers, and acquisitions.

DISCLAIMER: This article is purely for informational purposes and is not a recommendation in any way for buying or selling stocks 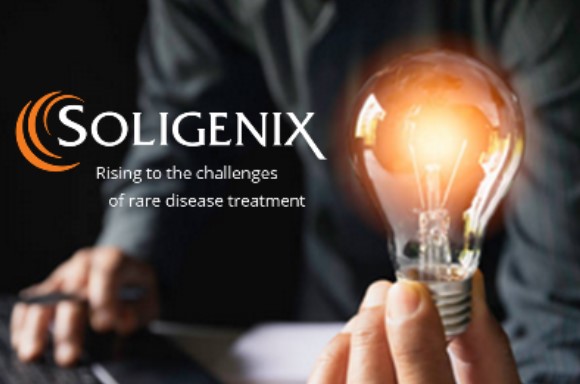