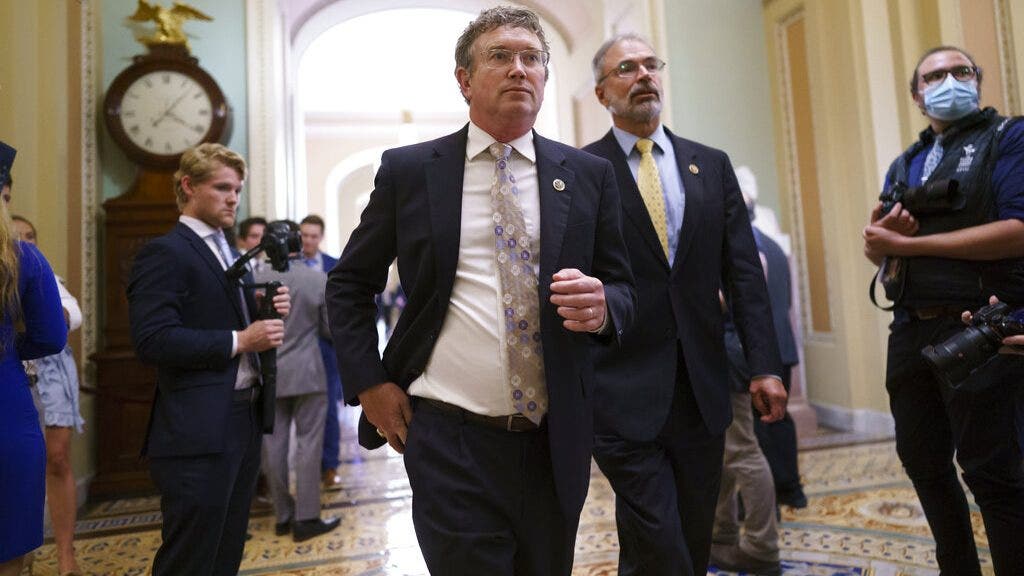 Rep. Thomas Massie, R-Ky., was spotted sporting a homemade national debt clock badge in the halls of Congress on Tuesday evening amid an ongoing partisan battle over raising the debt ceiling.
Massie was seen by reporters wearing the makeshift badge as Washington faces a renewed fight over lifting the debt ceiling, including proposals to allow the government to borrow without any limit set by Congress.
Politico reported that Massie built the badge himself out of a combination of roofing copper and a microprocessor over the course of about three days.
He told the outlet that he pulled the data from "about 400 lines of code" on the Treasury Department’s website.
The government hit the debt ceiling — currently set at $31.38 trillion — last week.
House Republicans have called for commitments to cut back on the expansion of federal spending, which has grown under both Republican and Democratic administrations.
US DEBT CEILING FORCES TREASURY INTO ‘EXTRAORDINARY MEASURES’However, Democrats have accused Republicans of "weaponizing" the debt ceiling as part of budget negotiations, risking U.S. economic health in the process by bringing it close to default.
"The government has an obligation to pay its bills," Rep. Bill Foster, D-Ill., said this week.
They also argued that congressional approval of new spending programs is what has repeatedly forced the government to keep hitting its borrowing limit, which has then forced Congress to keep raising the debt ceiling.
DEMOCRATS PUSH TO ELIMINATE DEBT CEILING, ALLOW UNLIMITED GOVERNMENT BORROWING"It's very disappointing," House Speaker Kevin McCarthy told reporters this week.
The federal government spent $4.4 trillion in fiscal year 2019, just before COVID hit.
It spent $6.5 trillion in fiscal year 2020, $6.8 trillion in fiscal year 2021 and $6.3 trillion in fiscal year 2022.
Source