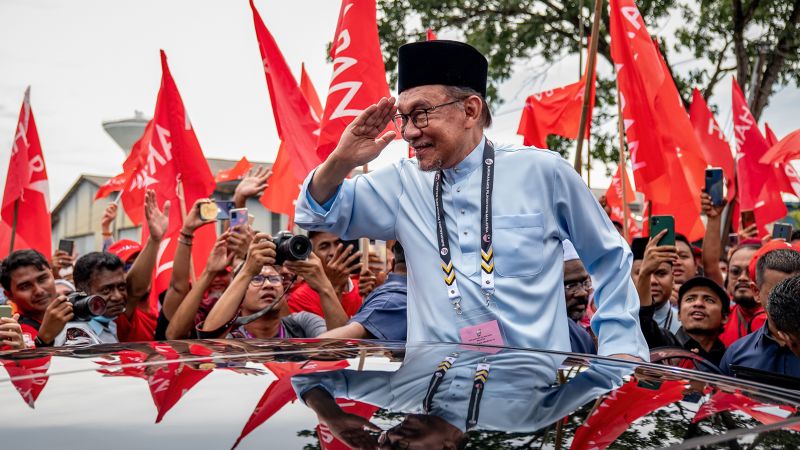 Malaysia’s king appointed long-time opposition leader Anwar Ibrahim as prime minister on Thursday, ending five days of unprecedented post-election crisis after inconclusive polls.
Anwar’s appointment caps a three-decade long political journey from a protege of veteran leader Mahathir Mohamad to protest leader, to a prisoner convicted of sodomy, to opposition leader and, finally, prime minister.
The ringgit currency posted its best day in two weeks and equities rose 3% on the Kuala Lumpur stock exchange.
The 75-year-old Anwar has time and again been denied the premiership despite getting within striking distance over the years: he was deputy prime minister in the 1990s and the official prime minister-in-waiting in 2018.
Anwar leads a multi-ethnic coalition of parties with progressive leanings while Muhyiddin’s alliance reflects more conservative, ethnic Malay, Muslim views.
His supporters expressed hope that Anwar’s government would head off a return to historic tension between the ethnic Malay, Muslim majority and ethnic Chinese and Indian minorities.
“All we want is moderation for Malaysia and Anwar represents that,” said a communications manager in Kuala Lumpur, who asked to be identified by her surname Tang.
His coalition, known as Pakatan Harapan, won the most seats in Saturday’s vote with 82, while Muhyiddin’s Perikatan Nasional bloc won 73.
Barisan said on Thursday it would not support a government led by Muhyiddin, though it did not make any reference to Anwar.
As premier, Anwar will have to address soaring inflation and slowing growth as the economy recovers from the coronavirus pandemic, while calming ethnic tensions.
Anwar will also have to negotiate agreements with lawmakers from other blocs to ensure he can retains majority support in parliament.
“Always regarded as the man who could unite all warring factions, it is fitting that Anwar emerged during a divisive time.”
Source