Building a hive of fans, followers, customers, clients, or stakeholders is a staple for Dr. Andrea Adams-Miller, International Publicist. She shares the publicity buzz on VoiceAmerica's Bizziness Buzz hosted by Frank Helring. 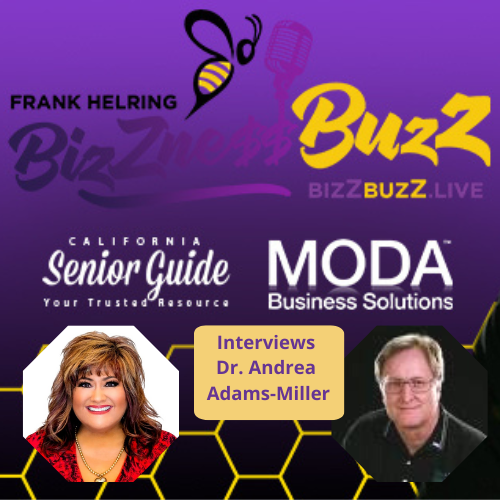 BizZne$$ BuzZ, hosted by Frank Helring, is all about business. Small business is in trouble, and they have been as far back as the "rocking" that occurred in 2008. The 14.2 percent loss of many brick-and-mortar small businesses happened by 2015 (source, NFIB 2015 Report). Already being squeezed by Internet predators, like Amazon, eBay, etc., they are sucking the life out of small businesses by customer and profit "siphoning." B2B Networking Groups and social media disappointments abound.

Small business needs a "counter" to these E-commerce tsunamis, and that mechanism is the power of unity, relationship, and the law of reciprocity. This edge is a non-compete. The "perfect storm" of shutdown/customer distancing, lack of capital, and uncertainty are the devastating effects of COVID19 disruption.

The Bizzness Buzz's mission is to provide your business the boost it needs to recapture business visions, rejuvenate operations, and create a platform that represents the company’s interests.

About Dr. Andrea Adams-Miller: Dr. Andrea Adams-Miller, named The Dream Maker by her high-level clients, is an Award-Winning International Publicist. Sponsorship Acquisitionist and Keynote Speaker who manifests her clients' dreams bigger than they ever dared possible. Just imagine how life is positively shifted when the client, the message, the services, and the products are known worldwide.

As a super connector and influencer, she has the authority, believability, and credibility to put you in the limelight, set up partnerships & acquire funding in more ways than imaginable.

She is the Executive Director of Happiness for www.TheKeepSmilingMovement.com, a mental and dental health nonprofit organization

She lives on an Ohio farm with her husband, Tom. They have three adult daughters, Destiny, Devony, & Demiya, and she loves being Glamma to Mavis, 6, and Warren, 3.

About Frank Helring: Frank Helring's combination of grassroots community involvement, strategic relationship formations, and continued success as a visionary corporate entrepreneur distinguish him as an invaluable asset to the small business community.

His past tenures include owning his own General Insurance Agency from October 1977 to 1991, serving as an Executive Director with World Vision of Orange County from 1994 to 1998 as President and CEO of a Community based Organization. He has served as President of JMS Consulting Group 2004-2006, a private equities firm in Los Angeles.

During that time, he personally consulted with the VP of Benefits of the legendary NFIB.com on "Boutique" Membership programs and Association Negotiating levels of involvement... He and his wife have owned Allure Med Aesthetics, Inc., a Medical Aesthetics Practice, since 2013. He has recently been involved with revolutionary firms accelerating the emerging "Opportunity Commercial Marketplace" and cutting-edge Medical Regeneration Technologies.

Frank is currently the host of Bizzness Buzz and Bizzness Watch on VoiceAmerican Business Channel and resides in Mission Viejo with his wife, Rhoda.

For more information about The RED Carpet Connection.com, contact the company here: